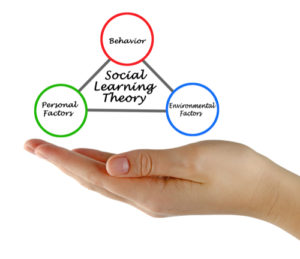 It’s convenient to think of learning as a standardized process that rarely changes. New information is presented, the mind absorbs and stores it, and that’s it. The problem, however, with this heavily oversimplified perception of how we learn and retain things is the long list of unanswered questions that remains.

Why do we choose to absorb some lessons and forget others? What factors improve or harm our ability to recall information when we need it? What’s the best way to motivate retention?

As we dive deeper into the cracks within this overarching framework, we learn more effective ways to structure our environments, communicate, and interact with one another. This is why the great social science thinker and psychologist, Albert Bandura, dedicated much of his life’s work to formulating and testing his Social Learning Theory.

Bandura believed that we absorb information by first observing the behavior of others in a social context. After observation, we then decide to imitate the behavior, but only if we believe that this will produce a reward. Finally, a set of cognitive factors known as Bandura’s 4 principles of social learning will influence whether or not observed behavior is imitated. Let’s take a look at these three components – observation and imitation, reward and cognition – to further clarify the Social Learning Theory definition.

Social observation and imitation: Children are an especially obvious case of the power of social observation, upon which SLT is built. We all have seen firsthand the propensity of children to imitate people around them, especially their parents and siblings. Bandura reinforced this with his landmark Bobo Doll Experiment, in which children placed into separate groups observed aggressive behavior. In one group, the behavior being observed was rewarded. In the other group, it was punished. Bandura and company then encouraged the children to play with toys (a Bobo doll included), monitoring their responses. He was able to prove two things right away: First, children learn through observation and imitation. Secondly, the condition of the reinforcement (positive or negative) is a decisive factor in learning and imitation.

Expanding on reinforcement: Bandura believed the presiding theories on reinforcement (by the behavioral learning theorists) to be reliable, but incomplete. Like the behavioral learning theorists, he believed that punishment and reward either encouraged or discouraged behavior, but there was more to be explored. For example, other theories did not explain vicarious reinforcement, which refers to behavior learned from watching others receive punishment or reward from certain actions. This introduces a complicating level of subjectivity. One person’s reward, for example, is not necessarily another person’s reward, which will affect the likelihood of an observer to learn and imitate certain behaviors.

Cognitive factors affect learning: Finally, Bandura emphasized that, even when all of the pieces are in place for an observer to learn and imitate a behavior (they observe the behavior and perceive that the reward is relevant to them), there are still several mediational processes that may stand in the way.

It is these four ideas, referred to as Bandura’s 4 principles of social learning, that earned the model its place as the “bridge” between the behavioral and cognitive learning theories. As mentioned, behavioral theorists emphasize punishment and reward as the key drivers of learning. Our environment offers a stimulus, we respond, and the outcome determines whether or not we will repeat the behavior. Cognitive learning, on the other hand, places a much greater emphasis on the internal processing mechanisms that build our behavioral patterns. While cognitive learning theorists acknowledge the role of the environment, they believe that a person’s unique internalization (past experiences, the way their brain stores information, how learners reflect on new information, etc.) of information is the largest player involved. These two schools of thought can be said to exist on either end of the “external vs internal” spectrum, and Social Learning Theory is situated in the middle. To better clarify the Social Learning Theory definition, let’s provide some examples of the theory in action.

Media – Before there were social media “challenges,” people imitated famous actors from their favorite TV shows and movies. Dressing like James Dean, copying dance moves from popular music videos and recreating famous action scenes are all fitting examples of Social Learning Theory in everyday life. In most cases, this behavior is incentivized by the desire to become socially accepted, attractive or otherwise well-liked.

Travelers and ex-pats – Everyone engages in social learning at some point or another, but travelers – especially those who intend to stay in a new area – must use social learning for adaptive purposes daily. When moving from the USA to Costa Rica, for example, observing and (accurately) imitating Costa Rican slang terms will help someone to assimilate faster.

New employees – Every workplace has its own subculture, some of which can differ greatly from the outside world. To remain in good standing, a new employee can observe and imitate the practices of their peers. Always clocking in at least ten minutes early, for instance, may help the new employee to remain in the supervisor’s favor.

Children – By far the most evident examples of Social Learning Theory in everyday life are those demonstrated by children on a regularly. They imitate their siblings, friends, parents and any famous figures whom they look up to. As long as the child perceives that their behavior will produce a relevant reward, they will likely imitate it at some point. This can include helping with housecleaning tasks, talking on the phone, and much more.

In summary, Social Learning Theory is a system of vicarious reinforcement in which someone observes and imitates a behavior in hopes of receiving a reward. For observed behavior to be properly imitated, Bandura’s 4 principles of social learning must be satisfied. First, the person must have paid close attention to the observed event and retain the memory for later use. They must also find the proper social context in which to imitate the behavior, ensuring a reward will be produced (motivation). Finally, they need to be physically and/or cognitively capable of imitating the behavior. When all of these factors come together, a socially relevant path to learning is opened.