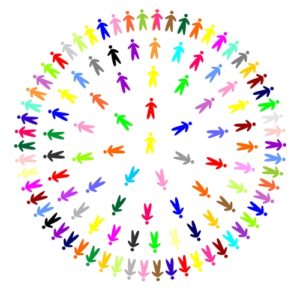 The life model of social work practice (Germain & Gitterman, 1980) was also highly influenced by social systems thinking. The original model emphasized practice with individuals, groups, families, and neighborhoods but was later revised to increase its emphasis on policy practice and policy advocacy. Ecological theory also influenced the life model of social work practice by emphasizing the “continuous exchanges between people and their environments” (Gitterman, 2017).

The life model requires the practitioner to examine a person’s fit with their environment and how they adapt to and cope with limitations and toxicity in one’s environment. The life model may be applied to looking at people in organizational environments or communities. The life model requires clinicians to examine key events in an individual’s life that may have impacted his development and attitudes such as major life transitions, periods of increased environmental stress, or changes in relationships. Groups and organizations, such as family at the micro-level or schools at the mezzo-level, may be seen as supporting or hindering a person during these key transition periods. The model also looks at how generational cohorts are influenced by key historical events and societal changes. 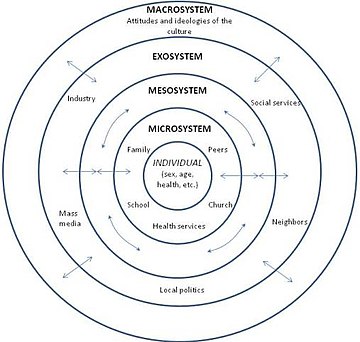 The socio-ecological model can be used to understand challenges faced by individuals at multiple levels of their social ecosystem and to develop therapeutic interventions and programs that address these problems. Consider the problem of child abuse and neglect for example; child outcomes will be greatly influenced by risk and protective factors at each level of the social ecosystem. Understanding the risk (e.g. poverty, mental illness) and protective factors (e.g. strong extended family bonds, positive school environment) at each level of a family’s social ecosystem is critical to treating the child and working with the family.

The social-ecological model of development can also be used to understand why parents abuse or neglect their children. Socio-ecological theories of why child maltreatment is perpetrated acknowledge the complexity of the social problem in a way that cognitive behavior theories may not. To address a parent’s abusive or neglectful behaviors, a social worker might provide individual and/or family counseling (micro) or parenting classes (mezzo). He might also advocate for increasing government spending on afterschool programs, daycare, or mental health clinics as a preventive measure.

Social systems theories can also be used to understand and address violence. The United States Centers for Disease Control has officially endorsed a socio-ecological model of violence prevention. The four levels of the model the CDC uses are: individual, relationship, community, societal. This framework is endorsed by the CDC for the design of both community, interpersonal, and family violence prevention programs. According to the CDC, “in order to prevent violence, it is necessary to act across multiple levels of the model at the same time. This approach is more likely to sustain prevention efforts over time than any single intervention” (CDC, 2019).

Multisystemic Therapy is another treatment approach informed by social systems theory which has been used to address child and youth mental health problems, juvenile delinquency, and substance abuse. MST requires therapists to treat the whole family system and to treat the child at multiple levels of his and his family’s social system (e.g., school, family members, peers, school, social support system) in the home and other community locations.

Finally, work with underserved and marginalized communities may also be informed by the life model of social work practice which, as noted above, looks at, among other things, the effects of community problems and governmental policies on individuals and communities. A social worker using the life course model might lobby the government to enact social policies and programs that help underserved communities, mobilize organizations and stakeholders in addressing community-wide problems, and garner resources needed by the community (Gitterman, 2017).

A drawback of social systems theory as used in social work is that sometimes mainly a psychological approach is needed for treatment; for example, an individual with severe mental illness may primarily need individualized psychotherapeutic counseling and perhaps medication.

Furthermore, interventions and programs informed by social systems theories are not always easy to evaluate. There are many moving parts to a systems treatment approach and it may be difficult to identify which components of treatment are working. Furthermore, social workers are supposed to consider an individual’s mezzo and macro environment when using social systems approaches, but some social workers may lack the cultural competency needed to understand a client’s social and cultural environment.