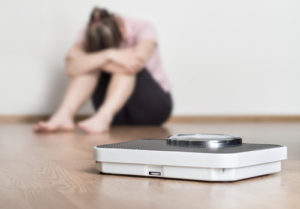 What is an eating disorder?

Anorexia nervosa is one type of eating disorder that involves an intense restriction of caloric intake through extreme dieting or exercise. Individuals with anorexia may even purge their food through induced vomiting or diarrhea. They have a distorted view of what the ideal body weight and shape should be and will do anything to achieve this ideal. There are more fatalities associated with complications from anorexia than bulimia and some estimates place mortality rates at 10% for anorexia.

Bulimia nervosa is slightly different from Anorexia nervosa in that it includes binge eating along with purging. Persons with bulimia may appear to have a normal body weight, unlike those with anorexia; however, they too will seek to control their weight through induced vomiting or diarrhea, reduced caloric intake, or excessive exercise. Binge Eating Disorder (BED), now recognized by the DSM-V, is characterized by eating large quantities of food, sometimes quite rapidly, beyond the point of feeling satiated. Purging is not a characteristic of BED but people with this disorder often feel guilty or ashamed after bingeing.

Persons with BED are more likely to be overweight but may be underweight as well. They may not always gain substantial amounts of weight because they may cut out entire food groups or engage in dangerous forms of dieting, in addition to bingeing. There are indications that BED is more prevalent than anorexia or bulimia, and it affects males almost as frequently as females.

According to the Mayo Clinic, some symptoms of anorexia include being extremely underweight, fatigued, and having low blood pressure, the erosion of tooth enamel due to vomiting, or hair loss.  Individuals with eating disorders often exhibit a preoccupation with controlling their weight and exercising. Those with bulimia, according to the Mayo Clinic, may exhibit “repeated episodes of eating abnormally large amounts of food in one sitting; and feeling a loss of control during bingeing” like they can’t stop eating or control what they eat.

Individuals with BED may be obsessed with their appearance, not want to eat socially, and schedule their lives around bingeing. Their weight may fluctuate a lot and they may lose their concentration because of the uneven intake of calories. BED can lead to obesity as well as kidney and heart disease due to the rapid fluctuations in weight and stress on the internal organs.

Social workers who diagnose an eating disorder should evaluate a client for other mental health issues as well. According to the Anxiety and Depression Association of America, eating disorders often co-occur with anxiety disorders, and therefore all conditions need to be diagnosed so treatment will succeed.  Other conditions eating disorder often co-occur with include depression, obsessive compulsive disorder, and substance abuse. Co-morbid mental illness is more prevalent with bulimia than anorexia. Those with OCD and an eating disorder have been found to have more relapses and relentless symptoms. Repeatedly checking one’s weight or shape in the mirror can be obsessive compulsive.

A multidisciplinary approach will be needed to treat clients with eating disorders. A physician should evaluate a patient’s overall physical health immediately after a behavioral health professional has diagnosed an eating disorder. Patients may need to be referred to specialists if there is damage to their teeth, skin, heart, or internal organs. For very serious cases, clients may need to be admitted to the hospital for intravenous fluids and emergency care.