Social workers have a critical role to play in preventing suicide in this country. They deliver suicide prevention programs and information to students, emergency room patients and their families, veterans’ groups, first responders, and other groups; staff suicide prevention hotlines; provide therapy and manage suicide prevention programs; and help gather data. According to the National Institutes of Mental Health (NIMH), suicide was responsible for the loss of 47,000 people in 2017. That is an alarming number and sadly much work remains to end this epidemic. 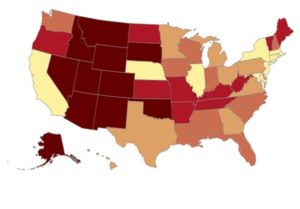 According to the Centers for Disease Control (CDC) over the past ten years suicide has been among the top five leading causes of death for Americans in the following age groups: 10 to 14, 15 to 24, 25 to 34, 35 to 44, and 45 to 54. For the first three age groups, suicide was the second leading cause of death in 2017. The older adolescent group also had the highest total percent of individuals (about one in ten) who had suicidal thoughts over the past year and the highest percent of individuals who attempted suicide.

The overall suicide rate for the U.S. has increased steadily over the past decade and half from a rate of 10.7 in 2001 to a rate of 14.0 (per 100,000) in 2017. This trend has not been seen in other western countries such as Canada and the U.K. In fact in many wealthy countries suicides have decreased over the past ten to twenty years.

The CDC’s Web-Based Injury Statistics Query and Reporting System (WISQARS) allows users to filter data on fatal injuries by cause, location, and demographics. Exploring the data yields further information about suicide in the U.S. in 2017. The highest age- adjusted suicide rates were in western states not including the west coast (see Figure 1). Men committed suicide at four times the rate of women, but women had more suicidal thoughts and attempts. White Americans had more than double the rate of suicide of Asian Americans, Black Americans, and Hispanic Americans, and Native Americans had a suicide rate five points higher than White Americans.

Educating Patients, Families, and the Public about Means

According to Means Matter: A project of the Harvard T.H. Chan School of Public Health 90% of individuals who attempt suicide and fail DO NOT go on to complete suicide; but with guns there is usually no second chance as 85% of suicide attempts by firearm are fatal. There is often greater impulsivity involved in the decision to commit suicide by gun. Many individuals who use a gun to commit suicide do not suffer from mental illness; rather the impulsive act of committing suicide by gun may follow an argument or break up.

Social workers need to understand suicide risk factors to develop effective prevention approaches. A first suicide attempt is a warning sign. A diagnosis of major depression, bipolar depression, or another serious mental illness is a risk factor as well. Additional risk factors include having experienced psychological trauma in one’s life, substance abuse, and a family history of suicide.

Social workers have an important role to play in counseling patients and families about risk factors related to means of suicide as well. For example, household gun access triples the risk of death by suicide. Social workers need to understand demographic risks as well. For example, white men and veterans commit suicide by firearm at very high rates. Furthermore, suicide by firearm among young children who have been bullied or who have mental health problems is also becoming more common.

According to the CDC, “personalized safety planning” is an evidence-based approach to preventing suicide. For patients with suicidal thoughts or who have gone to the emergency room due to a suicide attempt, a PSP can reduce the threat of future attempts by educating patients and their families about “ways to limit access to lethal means such as firearms, pills, or poisons. The plan also lists coping strategies and people and resources that can help in a crisis.” Routine screening for suicidal thoughts and behaviors in emergency rooms and for high-risk populations such as incarcerated individuals is another effective approach to preventing suicide.

Social workers play an important role in preventing suicide among youth by delivering universal, targeted, and individual prevention programs to middle school and high school students. According to the Suicide Resource Prevention Center (SRPC) evidence-based suicide prevention programs for youth in schools and other settings include:

Not Being Afraid to Talk about Suicide

Working for a Hotline or Crisis Center 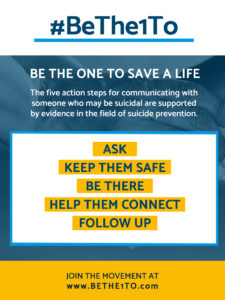 Social workers also may have an opportunity to work for suicide prevention hotlines and crisis centers. The National Suicide Prevention Lifeline (NSPL) provides free and confidential support and information to callers who are routed to professionals working at local crisis centers. The NSPL also has designed a digital outreach project called #BeThe1To which helps educate the public and professionals about how to prevent suicide. Here is a graphic that can be shared through social media or elsewhere:

The NSPL has several resources and guides for professionals including suicide risk assessment standards and guidelines on follow up care.

Social workers have so many opportunities to prevent suicide in this country including implementing evidence-based programs and therapies. Students who are interested in suicide prevention should identify professors who are knowledgeable about suicide prevention and have some practice experience. They should also seek out fieldwork opportunities that will allow them to gain experience working at a crisis center, hospital, or outpatient clinic.